Clothing Preference of the 21st Century Tribal Women: A Study of the transformation in the Costume of Tribal Women of Tripura, India

Clothing Preference of the 21st Century Tribal Women: A Study of the transformation in the Costume of Tribal Women of Tripura, India

An ethnographic research was conducted from 2011 to 2016, to study the tribal costume of the Tripuri and Reang tribe. Tripura is situated in the northeastern part of India. It is surrounded on the north, west, and south by Bangladesh and is accessible to the rest of India through Assam and Mizoram state. Tripura witnessed the emergence of a new culture, with the flow of immigrants in the state during the post-independence period.

There are about nineteen different tribes living in Tripura. The Tripuri and Reang are the most primitive tribes of Tripura. The uniqueness of the tribal community is expressed in the hand-woven textiles. The tribal communities are known for their conformity in dressing, a form of social interaction within the tribal community in which one tries to maintain standards set by the group. With modernisation and socio-economic development, the preferences of the modern tribal women have changed from the traditional way of dressing and adorning.

The traditional costume has also undergone changes in terms of textiles, colour, and motifs as well as in draping style. The research paper focuses on the transformation that has taken place in the traditional costume while the Tripuri and Reang tribal women also strive to preserve their cultural identity. One of the great challenges for tribal communities in the 21st-century is to develop practical models to capture, maintain, and pass on traditional knowledge systems and values to future generations.

The study ideates that there is a rise of contemporary local, regional, national and global contexts, raising questions about cultural conviviality and the influence of trans-cultural, trans-national and multicultural factors influencing different cultural identities, which can also be witnessed through the textiles and costumes of the tribes. 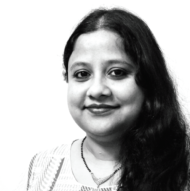 Ms Paramita Sarkar graduated in English (Hons) from Tripura University in 2000. She completed her three years Advanced Diploma in Fashion Technology at Wigan & Leigh College India Ltd. She won the Best Creative Collection for working with tribal textiles, in her Graduation Show in the year 2003. She completed her Master of Design at the National Institute of Fashion Technology, New Delhi where she was awarded the Best Research award for the topic ‘Twenty-first Century Costume of the Tribal women of Tripura’.

She has experience of working in the export oriented, NGO sector in Kolkata, Mumbai and Delhi. Her passion has always been in the area of Indian handloom & handicrafts. Currently, she is an Assistant Professor at National Institute of Fashion Technology, Kangra, Himachal Pradesh.