The pursuit of nothingness in Japanese aesthetics: Applications to fashion design

The pursuit of nothingness in Japanese aesthetics: Applications to fashion design

This study considers the concept of nothingness in light of the theories of philosophers Daisetsu (D.T.) Suzuki and Kitaro Nishida, and compares them in terms of relationships with Japanese art and design. It also aims to clarify the nature of creativity inspired by nothingness, and to verify whether it can be a source of new possibilities in fashion design.

Nothingness is often defined as ‘the opposite of something’ (Hiromatsu, 1998: 1559), but is it really so simple? Speaking of the emptied no-mind, Suzuki said: ‘Emptiness… liable to be mistaken for sheer nothingness is in fact the reservoir of infinite possibilities’ (Suzuki, 1997: 86). Nishida described the perception of absolute nothingness as ‘seeing the form of the formless and hearing the sound of the soundless’ (Nishida, 1987: 77).

In works of Japanese art such as Tohaku Hasegawa’s folding screen Pine Trees, nothingness is not merely represented as a space or blank, but is employed as a means of conveying crucial but invisible things by depicting the surrounding scenery. This rendering of the seen and the unseen taps into a limitless well of emotion.

In Japanese product designs such as Mujirushi Ryōhin (hereinafter called ‘Muji’), nothingness brings adaptability that is recognized as adding value to the products. Their simplicity and blankness imparts not only the beauty of functionality, but also the ultimate in adaptability, so they can be accepted by any user.

In its 2011 autumn/winter collection, the Japanese fashion brand Matohu expressed the beauty of plainness in delicate colours and infinite gradations.

In their 2015 spring/summer collection, a spirit of utilizing the material’s innate properties conveyed simplicity and purity. The infinite creative potential of nothingness promises to foster the development of new possibilities in fashion design. 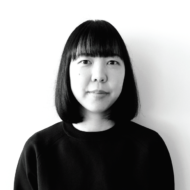 Sayaka Kamakura is an assistant professor in the faculty of fashion science at Bunka Gakuen University. She graduated from Bunka Gakuen University (formerly Bunka Women’s University) and moved to London in 2008. She completed her graduate diploma degree in fashion at Central Saint Martins College of Arts and Design in 2009. After graduating, she continued her study in Fashion womenswear and completed her Masters degree at the Royal College of Art in 2011. She has worked at Bunka Gakuen University since 2012. She was awarded the IFFTI Initiative Award in the Junior Faculty category at the 16th Annual IFFTI Conference with a paper entitled ‘The space between body and dress’.