During the past few decades, the practice of Biofeedback has gained increasing prominence in medical circles due to the measurable and positive results it provides. Patients presenting various ailments, ranging from ADHD to Autism, have shown quantifiable improvements. The core of the Biofeedback process is to provide the observer-patient with information on their current state, measured with digital tools, and showing the observer the ‘optimal’ state they should aim towards. In time, the observer-patient begins to mirror the ‘optimal’ state, thus improving their existing condition and, in many cases, curing it.

The purpose of this paper is to begin to investigate the existence of such processes that happen on the unconscious level as presented by everyday people that may affect their fashion identity. The limited study presented here provides the basis for further exploratory investigation.

If the brain is in a constant state of observation, does it observe and recognise any type of ‘feedback’ on the state of its own visual self-expression? Does it ‘autocorrect’ itself? The first step is to investigate whether there is such a process of observation and autocorrection, and the second step is to explores the sources of the feedback, if such mechanisms exist, in shaping personal fashion identity. 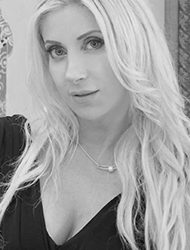 Evelina Poghosyan has been infatuated with fashion since she attended her first fashion show at the age of nine. Evelina attended Atex Fashion Academy and Otis College of Art and Design. She has won several awards, including Rudi Gernreich in Los Angeles, Onward Koshiyama in Tokyo and Samsung Award in Seoul. Her work has been featured at art exhibitions; Los Angeles Fashion Week and sold at high-profile stores such as Saks Fifth Avenue, Newman Marcus and Bergdorf Goodman. In 2015, she sold her ‘athleisurewear’ company Peggy Moffitt. She has taught at Otis College of Art and Design on and off since 2005 and, is currently completing her second Masters in Business Administration.