Everything is connected: the influences and inspirations of global icon and radical fashion philosopher, Vivienne Westwood

Everything is connected: the influences and inspirations of global icon and radical fashion philosopher, Vivienne Westwood

Fashion’s foremost thinker, Vivienne Westwood believes the foundation of a meaningful and productive life lies in the development of personal identity via the process of intellectual evolution. This, she believes, can be found through the exploration of three key areas: Environment and Responsibility. Politics and Justice. Thoughts and Culture. The intention of this paper is to distil the key influences in Westwood’s psyche and contextualise them in order to gain a greater understanding of her design signature. Secondary data is deployed in the process but primarily research is based on experience, interactions and engagement in dialogue with Vivienne Westwood over a 30 year period. In depth discussion on the themes within this paper were undertaken with Westwood on 19th June 2018. Analysis of Westwood’s company library and attendance at Westwood’s staff presentation of The Grapes of Wrath on 5th November 2013, also inform this. In short, these are new contributions to the analysis of Westwood’s work.

As a self-confessed activist and advocate of cultural appreciation, Vivienne Westwood believes art links the past, present and the future. She discourages consumerism, acutely aware that this pronouncement is alien to standard business practice. The downsizing of her company – still privately owned – is an ongoing struggle with Westwood’s ‘buy less, choose well, make it last’ mantra in contradiction to the aims of her management. An advocate of reading books rather than scanning social media, make do and mend rather than mass consumption, and history rather than modernism, her unique – and often radical – philosophy has become a rallying cry for a new generation of fashion followers.

Analysing and outlining the core inspirations and influences in Vivienne Westwood’s arsenal – from Aldous Huxley to The Wallace Collection – the aim is also to investigate these in a fashion context, dissecting how such disparate influences can be applied and translated in sartorial form. In Westwood’s own words ‘Everything is Connected.’ 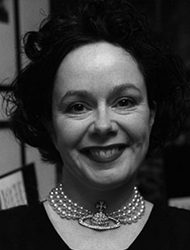 Linda Watson graduated from Northumbria University in 1987 with a double first class honours degree in Fashion Design and Historical and Critical Studies. She assisted Vivienne Westwood on two collections – Pagan I (Spring/Summer 1988) and Voyage to Cythera (Autumn/Winter 1989/90) before becoming a Fashion Writer at British Vogue in 1989. On becoming a freelance fashion writer in 1995, Watson worked with the late Jean Muir as a Speechwriter and Textile Designer Celia Birtwell on her Ossie Clark archive. A contributor to Harper’s Bazaar, Marie Clarie and The Evening Standard, for 20 years she wrote every fashion and style-related obituary for The Independent ranging from Yves Saint Laurent to Anna Piaggi. Author of Vogue Twentieth Century Fashion (Carlton 2000), Fashion Visionaries (Lawrence King 2015) and Vogue on Vivienne Westwood (Quadrille 2013), Watson also staged an exhibition of 80 seminal images from veteran catwalk photographer Chris Moore’s archive in 2011. Watson has given numerous lectures at the V&A with subjects ranging from Alexander McQueen to Diana Vreeland. She is also a regular contributor to BBC Radio 4. Within academia, she has been an external assessor at London College of Fashion and Glasgow School of Art, and guest lecturer at Syracuse University and the Lebanon American University. Linda Watson is currently Reader in Fashion at Northumbria University.