LASALLE College of the Arts, Singapore

Shadowear is a practice-based research that challenges the conventional approaches to the body in the process of fashion design. The prevailing methods in fashion design approach the body as a subject to be dressed and attempt to translate its three-dimensionality into garments. Yet, such approaches overlook the multiple existences and extensions of one’s body. This project explores the body from a new perspective: through the body’s shadow projections onto various surfaces and in different contexts. Expanding the borders of the body and implicitly the garments, into the territory of the shadows, and their flat appearance has the potential to dissolve perceptions of race, size, individuality, gender and identity.

Under the influence of light, transient features that the body produces onto surrounding surfaces –shadows– can be considered as impalpable extensions which trace our existence and continuously accompany us. Aiming to decipher the visual information hidden within the silhouette of the shadow and translate it into garment-making, the designer has freedom for innovation and play. This method entails both a rigorous approach to the shadow silhouette in the process of pattern making, but also an imaginative methodology to make the ephemeral and impalpable, permanent and tangible.

This research proposes a new method in fashion design by shifting the focus of the process of creation from the three-dimensionality of the body, to the flatness of one’s shadow. This method is an attempt to redefine and challenge existing fashion conventions and to explore new approaches to the body, investing the designer with a range of new roles, exemplified through Shadowear, a new method for designing and making garments from and for one’s shadows. 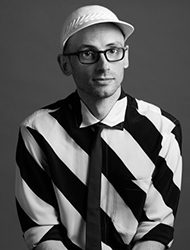 Dinu Bodiciu is a Romanian born fashion designer currently living in Singapore and teaching at LASALLE College of the Arts. He graduated with an MA in Fashion Design and Technology at London College of Fashion. His design practice is a continuous exploration of the human body, both physical and sensorial. Through his practice-based research, he aims to push the interaction boundaries between garments and body.