Thousands of young people walk into a design school for the first time every summer, eyes bright with hope and the promise of leaving three years later armed with what it takes to be the best in the industry. Learning to stitch, cut, fit and re-fit every day. Patterns half done, gone wrong, mistaken stitches, snips and stains. When the day is over, all these mistakes are swept up and taken away. And tomorrow is a new day to learn some more. But what educators may not realise is that they are subconsciously endorsing wastefulness by demanding perfection.

Author Henry Petroski put it eloquently when he wrote, ‘Successful design is not the achievement of perfection but the minimization and accommodation of imperfection.’ This sparked the idea of 1) Collecting the waste generated during the process of pattern cutting and garment construction and 2) Finding ways to educate using this continuous effusion of waste that bears infinite possibilities to re-create value.

A group of ten Year One students were guided to use the waste collected to create garments as a part of a ‘form generation’ module. Traditionally, form generation is the kind of cutting technique that generates waste. Through an action-based research methodology the process of waste generation was analysed, and seen not as a pollutant to be discarded but as an opportunity to create. The end product symbolises a series of actions intended to change perceptions and, eventually, the indigenous industry, rather than merely embedding symbolic notions on the wearer.

The paper documents the process of ‘unspecified outcome’ driven learning through specific actions of waste collection, creating and delivering a module in Year One, and reflecting on the process and results. Here it is proposed that this will imbue the next generation of Indian designers with change agility, and the means to think outside of the regimented nature of assembly lines and mass-produced retail uniformity, in an attempt at making them better prepared for wholly uncertain future scenarios. 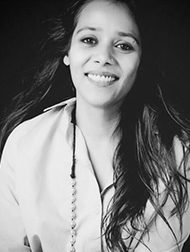 Shalini Gupta is a designer and educator, currently working as Head of Department, Styling and Beauty, at Pearl Academy, India. She graduated from the National Institute of Fashion Technology, Mumbai in 2000 with a Bachelor in Design. She has successfully run a design firm for 15 years specialising in handmade fashion accessories, before making the switch to teaching full-time in 2014. She has a keen interest in the history of costume and design, and fashion as communication. She is now building her body of research around gender stereotypes in India and fashion-related curriculum. She has presented her work at ‘Revisiting the Gaze’ UAL, which focused on Aging women and how they negotiate personal identity considering the diminishing Male Gaze. She also presented a photo series called ‘Ungender’ at Cumulus 2017, which focused on cultural symbols in dress that stereotype and how if reversed it may help to ‘ungender’ certain preconceptions about gender roles themselves.