“We have transcended a time where women had a ‘sell buy date’ after a certain age. People don’t feel like they need to be invisible anymore after 50.” 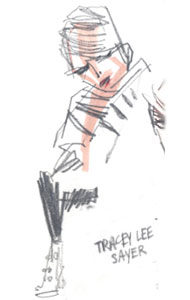 Tracey Lea Sayer is the Fashion Director of the Sun on Sunday’s Fabulous magazine. As a fashion director on an extremely busy weekly title, Tracey’s working day can include anything from styling a cover shoot with Kim Kardashian to flying half way around the world to shoot a high street fashion editorial.

After completing work experience with Vivienne Westwood and Hilary Alexander on the Daily Telegraph, during her gap year, Tracey returned as a full time fashion assistant, after graduating from Central St Martins, Fashion Communication and Promotion course in 1997. After this she worked as a stylist at the Daily Express, ‘S’ magazine (1999) and the London Evening Standard (2003).

In 2004, the glossy world of the monthlies called. Tracey was headhunted to launch a new fashion magazine called Happy. After this, she did a brief stint online at Handbag.com before being poached back into the world of newspapers for the launch of the News of the World’s ‘Fabulous’ magazine. After the paper folded in 2011, Fabulous magazine was lauded a valuable an asset to the Murdoch empire and was saved from closure and moved to the newly launched Sun on Sunday.