“You have some very bright young talent and I know they will do well in the fashion industry in due course. It is always a pleasure to be with you all in Manchester.” 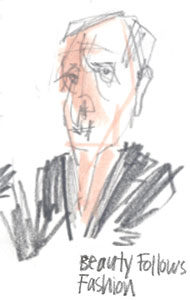 Terry Mansfield CBE has spent his whole career in the media business, mainly with the Hearst Corporation, and was the first non-American to join the Hearst Board of Directors and remains a consultant there.

When he retired from being the Chief Executive of The National Magazine Company (the British subsidiary of Hearst US) Terry became involved in many projects, giving his time to tomorrow’s talent in the creative industries. He firmly believes there are three stages in life: learning, earning and returning.

Terry was the Chairman of MOBO music awards for three years and for seven years, the Chairman of Graduate Fashion working with universities to build international licences in China, India and Thailand. He is on the Campaign Board of Historic Royal Palaces, is Chairman of Arts Thread, a digital platform connecting students, graduates, institutions and industry in the field of design, and has been a Judge of many major fashion events.