“I love clothes, not fashion” 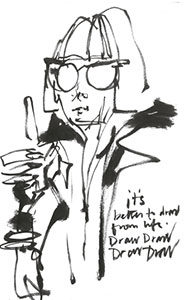 Barbara Hulanicki was awarded an OBE for her services to fashion in 2012 but began her career in the early 1960s as a freelance fashion illustrator. In 1964, she founded her business as a small mail order company called Biba’s Postal Boutique and got a break selling a pink and white gingham dress and matching headscarf. This struck a chord with the younger generation and the dress became an instant success selling around 1,700 units, allowing her and her late husband Stephen Fitz-Simon to open their first London boutique in 1966.

Biba became a hangout for artists, film stars and musicians including Mick Jagger and David Bowie, and she worked with some of the best photographers in the business. Now in her eighties, she continues to work as a creative consultant for high street labels, has her own online business, and continues to inspire us, quoting in her closing comment of this interview, ‘I do like clothes, but not fashion!’

Manchester Fashion Institute thanks Barbara for taking part in our conference and for her words of wisdom to carry with us for the next fifty years.